Sapporo snow festival 2017 is held from 1 Feb to 12 Feb at three venues in the city. I will especially introduce two venues, both of which locate in the city center with easy access to shopping spots and major hotels.
Illuminations in the nights at Odori venue is till 22:00 and till 23:00 at Susukino venue during snow festival.
Let me make brief introduction for each site of 2017 Sapporo snow festival.


<Odori site>
Odori park stretching from east to west in Sapporo city center becomes a bustling street with lots of snow and ice monuments. The size and precision of each monument made with blight white snow and clear coloured ice are the most attractive points for Sapporo snow festival. From large monuments to small monuments which are mainly made by Sapporo citizens, many variety of monuments and sculptures will stand along the street while some events are held at several areas in Odori park.
Large snow monuments are usually created in reference to domestic and international famous architectures, which impress a lot of visitors every year.
Introduction below is some of this year’s highlights.

*Snow sculpture of FINAL FANTASY VII @Odori 4 Chome
-It represents ambience of FINAL FANTASY VII, a very popular Japanese video game with offering special sound by the latest audio system such as 7.1 channel surround-sound system for the first time in the history of Sapporo Snow Festival.

*White Star Wars @Odori 10 Chome
-This snow sculpture, White Star Wars’ approved by Lucas Film Ltd. & TM and supervised by The Walt Disney Company represent C-3PO and R2-D2, familiar characters in the movie, besides the world’s first snow sculptures of BB-8 and Kylo Ren as such large scale. You must be enjoying its overwhelming scale of it! Lighting show with powerful sound is also held in the night during the festival.

*International Snow Sculpture Contest @Odori 11 Chome
-People from various regions of the world will participate in this year’s contest to compete snow sculpture making. A variety of snow sculptures reflecting international flavors stand at the contest area where everyone can see each sculpture.
Last year’s result of the contest http://www.snowfes.com/english/contest.html 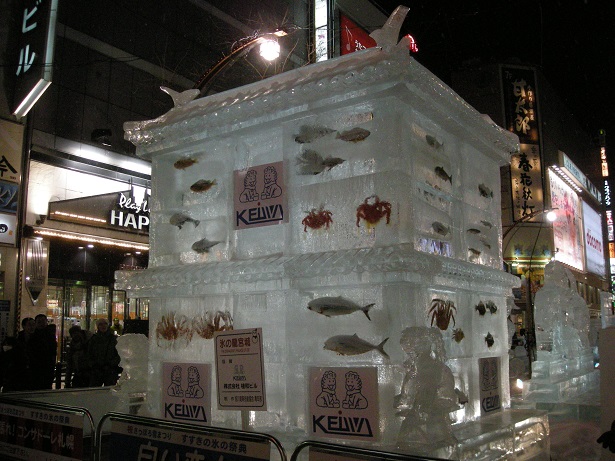 <Susukino Site>
Under the theme of “Enjoy the Ice” rather than “See the ice”, this site offers fantastic ice sculptures including the works for Ice sculpture contest. You could enjoy visiting ‘Fureai Hiroba’ to touch or even ride on the ice sculptures, besides take photos in the Illumination Street. An ice bar will also locate in Susukino site so that visitors can enjoy hot drinks there.

By the way, you can use underpass through Sapporo station to Odori area and Susukino area to avoid coldness outside, but if you visit for snow festival, surely need to walk outside to see each snow sculpture.
From late Jan to mid Feb, it is the coldest period when local people especially keep layers with additional warm clothes such as thermal underwear, thick wool sweater and overcoat. If you come from warm countries, please prepare some warm clothes and items blow in order to stay outside as comfortable as possible.

Suitable Clothes: thermal underwear like “heat tech” by Uniqlo, wool socks (I sometimes put them with two layers), thick stockings (inside of jeans or any pants), turtle neck shirt under wool sweater

In addition to warm items above, I personally recommend to pay attention to footwears. Outside especially pedestrian path in the snow festival is tend to be slippy, so you would better to put Anti-slip tool which is available at department stores and kiosks.